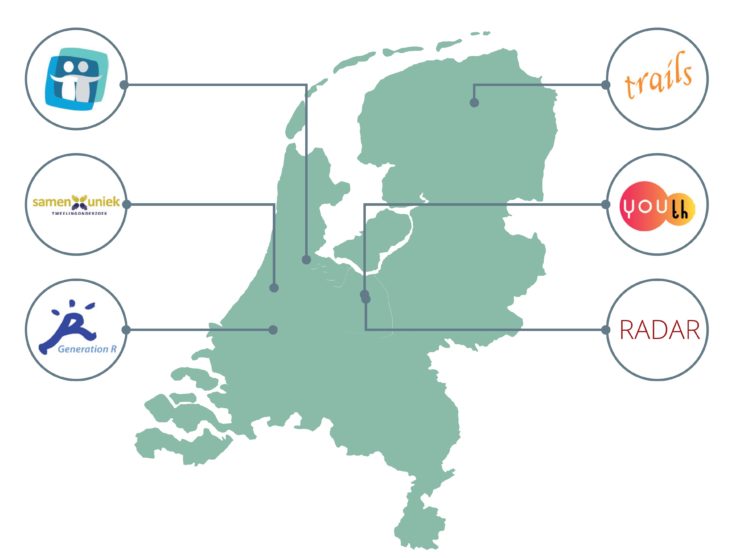 Two new longitudinal child cohorts were set-up as part of CID (YOUth cohort and Leiden intervention cohort L-CID), while the four others have been following children for over a decade (TRAILS (Tracking Adolescents’ Individual Lives Survey), Generation-R, RADAR (Research on Adolescent Development And Relationships) and NTR (Netherlands Twin Register)).

Each cohort includes both shared and specific measures of social competence and behavioural control. In addition, several developmental traits are collected in all cohorts. Together, this allows integration of datasets as well as more focused analysis in two or more cohorts.

YOUth (work package 1) is a large scale, longitudinal cohort study, following children in their development from pregnancy until early adulthood. A total of 6,000 babies and children from Utrecht and its surrounding areas will be included in two different age groups and followed at regular intervals.

In L-CID (work package 2), large-scale experimental-longitudinal interventions of parent and peer behaviour are carried out in same-sex twins, allowing for testing of which child characteristics shape the effect of (manipulated) environmental factors.

TRAILS (Tracking Adolescents’ Individual Lives Survey) (work package 3) is an ongoing, multidisciplinary study on the psychological, social and physical development of adolescents and young adults. The recently launched TRAILS Next cohort focuses on the children of the participants.

Generation R (work package 3) is a prospective cohort study from foetal life until young adulthood in a multi-ethnic urban population.

RADAR (Research on Adolescent Development And Relationships) (work package 3) is a population-based prospective cohort study with a full family design. In 2014, RADAR: The Third Generation (RADAR G3) started to include RADAR participants who were parents-to-be or who had a child under the age of 4.5 years.

NTR (Netherlands Twin Register) (work package 3) began in 1987 with data collection in twins and their families, including families with newborn twins and triplets. Now these twins, for whom there is data since infancy, are becoming parents themselves. So NTR has recently started collecting multigenerational data in this unique group.

Animal cohorts (work package 4) including rodent and avian models. The rodent models and behavioural tasks were optimised to complement WP1-WP3 and several series of experiments have been started in collaboration with WP1 – WP3. There are remarkable parallels between song learning in songbirds (such as the zebra finch) and the acquisition of speech and language in human infants, at the behavioural and neurogenetic level. Therefore we can use birdsong learning as a model system for acquisition of speech and language in humans.