The influence of genes and environment on social brain and behaviour

In the Consortium on Individual Development we aim to increase our understanding of why it’s easier for some children to find their way into society than it is for others. One of the means to achieve this is by investigating prosocial behaviour and empathy, two important contributors to social competence.

Earlier research has shown consistent associations between prosocial behaviour and empathy and a specific set of brain regions known as the social brain, but we did not 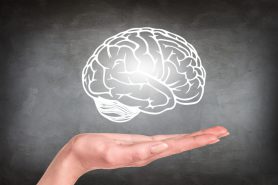 In the current study we investigated the influence of genes and environment on social brain and behaviour in the Leiden-Consortium on Individual Development (L-CID) middle childhood cohort (aged 7-9, N = 512). Prosocial behaviour and empathy of the children were reported by the parents. We focused on surface area and cortical thickness measures of four social brain regions: the medial prefrontal cortex (mPFC), temporo-parietal junction (TPJ), posterior superior temporal sulcus (pSTS), and precuneus, as well as two control brain regions (cuneus and lingual gyrus). As we believed social brain regions to be more susceptible to environmental influences compared to our control regions, we expected that the social brain regions would be relatively more influenced by environmental factors than by genetic factors.

We also showed that the social brain regions were mostly influenced by genetic factors, which was not what we expected. Interestingly, for the TPJ we found influences of both genetic and shared environmental factors, suggesting that this particular region might be relatively more susceptible to environmental influences in comparison to the other social brain regions. Finally, we found that the precuneus shows a small genetic overlap with empathy, suggesting that the same genetic factors explain differences in cortical thickness of the precuneus and levels of empathy.

Follow-up longitudinal studies in the L-CID middle childhood cohort will teach us whether these genetic and environmental influences on social brain and behaviour change over time, or whether they remain stable as children transition into adolescence.